As a player, Alec had previously played for Tottenham Hotspur and Charlton Athletic before joining the R’s in February 1938.

Later that month he made his debut against Reading at Loftus Road and scored one of the goals in the 3-0 win. Alec made a total of 47 appearances, scoring 16 goals, before the outbreak of war halted his career.

He was drafted into the Army and served as a tank officer. After the war Alec joined Yeovil Town as player/manager and achieved great success. 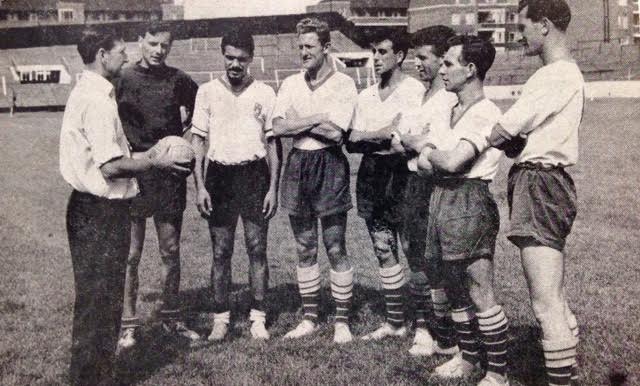 In August 1959, he arrived at Loftus Road after Jack Taylor had moved on to manage Leeds United.

In the 1959/60 Club Handbook the QPR President, The Earl of Cottenham, wrote: ‘The Rangers have taken stock. I am sure all you loyal supporters will give Mr Alec Stock and the players your wholehearted encouragement, so that the stock of this old Club rises to its rightful place in the football world.’

Ian Holloway would most certainly concur with the title of Alec’s short article on page 8: ‘The Key Word is Enthusiasm” writes Alec Stock – “Preen not your feathers today with the glories of the past for you are apt to tarnish, not gild, neither dwell on your past misfortunes or errors except to put them to good use as stepping stones to future success.”

‘The above is cribbed from an old programme, and, in my opinion, is an apt appreciation of the Club at the moment.

To everyone I say this – there is nothing wrong with Queen’s Park Rangers Football Club that sheer enthusiasm can’t put right.

So the key word for season 1959/60 is – ENTHUSIASM – coupled with a plea that you, our staunchest of supporters, will play your part.

Enthusiasm on the part of all – officials, players and supporters – will lead the Rangers during season 1959/60, back to the standards of success formerly achieved by the Club.’

Rangers finished the season in 8th place and we know what he went on to achieve for our Club.

(The above pic is from the 1959/60 Official Handbook and shows Alec on the first day of training chatting to; Mike Pinner, Joe Cini, Brian Bedford, Brian Skingley, Bert Brown, Jimmy Andrews and Ken Whitfield)