Chris Martin atoned for a saved penalty to rescue a point for Fulham in their West London derby at QPR. Derby loanee Martin had been denied from the spot by a fine fingertip save by goalkeeper Alex Smithies early on before Ryan Manning put QPR ahead.

Manning seized on a loose pass by Kevin McDonald inside his own half before slotting in his first senior goal.

Fulham rallied in the second-half and equalised when Martin cleverly diverted in Tom Cairney’s goal-bound strike. Martin’s leveller 15 minutes from time denied QPR a fourth successive Championship victory, while Fulham have lost just once in their past eight league matches.

After Smithies’ early penalty save for QPR, his sixth in ten faced for the club, after Sone Aluko tumbled in the box, the hosts deservedly took the lead.

Manning netted his first goal in just his fourth senior appearance only a day after the 20-year-old Irish midfielder signed a new contract with the club.

Chances came thick and fast towards the end of the game and Smithies twice denied Aluko from shots outside the area.

Cairney was fortunate to escape a late red card for Fulham when he, Martin and QPR ‘s Joel Lynch were involved in an off-the-ball incident. Referee Keith Stroud chose to show all three players a yellow card deep into stoppage time.

QPR manager Ian Holloway told BBC Radio London: “I didn’t think it (the early penalty awarded to Fulham) was fair. How can the referee give them a penalty like that? I’ve never seen anything quite as embarrassing in my life to be honest.”

“Am I allowed to say that? Yeah, because I can. I thought it was soft to say the least and maybe some of our lads are too honest. That’s never a penalty in my book.”

“We’re all standing here on the side being judged and hopefully Mr Stroud will be too because that was an awful performance from a referee.”

Fulham manager Slavisa Jokanovic told BBC Radio London: “At the start of the game we made a few mistakes and after we made another mistake, they scored a goal.”

“In these conditions with a tight pitch, we found it hard to move the ball and they closed the space well. In the second-half, we injected a bit more pace and moved it better.”

“Missing penalties is part of the game, but it’s not an especially normal situation if you shoot eight times and miss six.”

“It’s strange, but we have to be calm and believe we will score the next time. Shooting in training and in games are two completely different situations.”

“But, Chris Martin showed incredible character to score towards the end of the game and I’m sure he’ll be the person to take a penalty next time.” 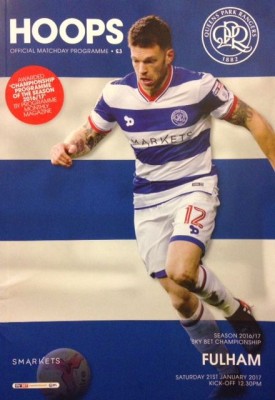 The visitors were awarded a penalty early on after Sone Aluko had collapsed in the box! However, Alex Smithies dived to his right to stop Chris Martin’s spot kick.

Amazingly, Fulham have been awarded three penalties against us this season and failed to convert any of them!

Despite Fulham having 75% of the possession, Slavisa Jokanovic whinged about the pitch after the game: “This kind of the field where we couldn’t move it one side or the other. It was prepared for them rather than us. We couldn’t be confortable with the ball.”

I was too far away to get a good view, but I was told that whilst Grant Hall was on the side of the pitch with a cut lip, it resulted in him being pushed and then it all kicked off! The Fulham manager tried to justify it when he said after the game:

“I wanted to clear my dugout – it’s part of the game and it’s a derby. I simply defended my few square metres.” Marc Bircham ended up being sent to the stand.

Luton Town fan Keith Stroud was an absolute disgrace. Surprisingly he didn’t add on sufficient time for the two incidents that flared-up towards the end of the game?

Good to see both Trevor Sinclair and Danny Shittu being interviewed at half-time. Big Dan in particular spoke very passionately about the R’s and we watched ‘that’ Trevor Sinclair goal on the big screen.