The 1914/15 FA Cup campaign got underway with a 2-1 home victory over Glossop. In Round Two, Rangers defeated Leeds City 1-0, also at Park Royal, and were then handed another home tie against Everton. The game was switched to Stamford Bridge and was played on 20th February.

The following report appeared in Sports Argus later that day:

‘Owing to Park Royal being required for military purposes, Queen’s Park Rangers had to take their tie against Everton to Stamford Bridge.

Queen’s Park Rangers had beaten both Glossop and Leeds City, and were not perturbed in having to tackle a First Division side.

There were 25,000 (?) spectators, and the game was played under perfect conditions.

Ten minutes later Millington blundered over to give away a corner, and Galt headed a goal for Everton, the ball glancing into the net off Millington. Subsequently the Rangers pressed, but were unlucky.

Ten minutes from the change of ends, Chedgzoy made an opening for Clennell to score a great goal for Everton, and for some time subsequently the visitors played easily, content with a two-love lead.
Ultimately Birch scored for the Rangers from Donald’s centre, and then the Southerners pressed vigorously. Parker and Kirsopp missed open goals for Everton, but the visitors mostly defended during the closing stages. Galt was ordered off.’ 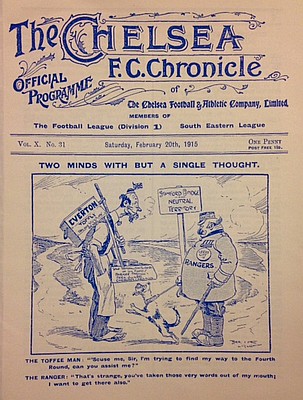 I’m not lucky enough to have the original programme, but I did manage to pick up a facsimile a few years ago. The cover headline reads: ‘Two Minds with a Single Thought.’

The Toffee Man remarks: “Scuse me, Sir, I’m trying to find my way to the Fourth Round, can you assist me?” To which the Ranger replies: “That’s strange, you’ve taken those very words out of my mouth; I want to get there also.”

This was to be QPR’s last FA Cup tie for five years.

The army had commandeered the Park Royal ground and the remaining home league games were played at the old Kensal Rise Athletic ground in Harvist Road.