Podcasters and people from fan sites alike gathered at Loftus Road on a chilly Tuesday evening in late November to meet QPR’s new manager Ian Holloway. The first hour of the meeting consisted of the recording of the 200th QPR Podcast, with ‘Ollie’ being interviewed by the founder members, Messrs Fraser, Finney, Mendes and Charles. The recording can be heard from the IndyR’s homepage.

As the recording finished and the equipment was packed away, Ollie began to relax and enjoy the freedom of being off the record. He was flanked by his wife Kim. The couple appeared to be very close – Kim nodded and at times smiled wryly as Ollie spoke. You got the feeling she had heard the Bristolian patter all before but didn’t mind listening one more time. 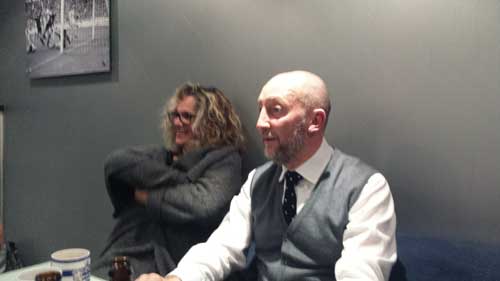 What Ollie gave us was a tour de force – a passionate description of his pride and delight at being back at the club he loves. Some of it we’d already heard before, like how he’d told Sky that the only job he would consider leaving the broadcaster for was the one in W12. But on form like this Ollie is a force of nature, a man to be reckoned with, an irresistible character you can’t help listening to.

He provided a number of insights (a few of which I am able to share!). He said in his tongue-in-cheek fashion that players ‚Äúdon’t like to think too much‚Äù. If you play players out of position they have to think – am I doing this right? Am I in the right place? If you play them in the right position it all comes naturally and they don’t have to think. Conor Washington against Norwich is a case in point.

About Les Ferdinand – Ollie loves WHY Les is at the club. Les is one of the best players the club has ever produced, and the former Rs striker is back at the club because he wants QPR to be like it was in the early 90s. The sort of place where a lad can come in from Hayes, develop and make it all the way to the national team.

Ollie acknowledges how great a team QPR in the first part of the 90s was, and what a fantastic influence Gerry Francis was both on that team and on his own career. There was a mentality, a team spirit and a blend of characters that worked and was very successful. Football moves on and changes but he wants to build something similar at QPR now and there’s no limit to what we can achieve.

He has learnt a lot since his last stint at Rangers. He recognised that Rangers fans probably saw the style of football he brought to Blackpool in their promotion season and wondered where that came from. He admitted he didn’t know how to play that way at Rangers before, but that is more of what he is looking for now. He said he is always assessing his skills to see how he can improve

Ollie is very honest about what to expect. The game today is all about results and he knows what he needs to do. But he asked for patience from the fans. He can’t guarantee certain results and fans shouldn’t expect to win every game. It might take a little bit of time to get the right ingredients together. For example, in the short term he is going to review the players out on loan to see which ones can come in and do a job for us. He hinted at casting the net wide overseas in future transfer windows. The overall message is though we can and we will get there.

The hour flew by and the audience sat there transfixed. At the end there was a rapturous round of applause in acknowledgement we had heard something a bit special.

For my part, I was a little sceptical when Holloway was first linked with the job. But I got on board as it looked more likely. And now after meeting the ‘boy from Bristol’? Well I don’t know about the players, but I’d go and run through a brick wall if he told me to.

It’s definitely an exciting new time at QPR. Who knows how this chapter will end? One thing I know for sure – no one’s going to be working harder than Ollie to make it successful.

Many thanks to Ian Taylor and Paul Morrissey at QPR for hosting the event and for the invitation.