HQ rocking, there truly is no place quite like it!

A scintillating first-half, two upfront, played on the deck, some great balls, movement and real passion about the place. The lead up to Seb Polter’s goal was simply wonderful!

A deserved win, but we made hard work of it, and let them back in the game.

Have felt for a while, these players are not that far away, but our final ball, and a real naivety in keeping our composure to coast home almost cost us.

We got the result, we got Ollie back, but moreover, we got our Rangers back…happy days.

Yes excellent result. Great to see two upfront, and Washington didn’t disappoint. He has been in the wilderness too long.

Great movement from the players, all very positive. Jack Robinson hung out wide and really made a difference as the extra man, until his injury.

Only disappointment was that we played so deep late in the game and allowed them to come on to us, as we had totally dominated for 70 minutes and could have been out of sight.

But for Ollie’s first game, he has definitely made an instant impact, and you could feel the love around Loftus Road.

At last, two forwards playing UPFRONT!!! Been banging on about it for over six months. You don’t get a plumber to fix your car, you don’t get a roofer to do your electrics and you don’t get a centre-forward to play on the left wing. JFH was a fuckwit, end of!

It was good also to see Jordan Cousins in the middle again instead of struggling out wide.

Looked like the players had a plan and worked as a team, both going forward and in defending. How many times did players put in last ditch challenges to block shots or crosses?

It’s only one game admittedly and Norwich played with ten men, but there were so many positives including Ollie and Bircham barking out orders on the touchline from the first seconds to the last.

On the downside, Jack Robinson picked up another injury yet again!

Joel Lynch was my MOTM.

Ian Holloway began his second spell in charge of Queen’s Park Rangers with a win as his side beat 10-man Norwich.

Canaries left-back Martin Olsson saw red in the second minute for handling on the goal-line, but Tjaronn Chery sent the subsequent penalty wide.

Conor Washington gave QPR the lead midway through the first-half and Sebastian Polter added a second.

Steven Naismith pulled a goal back to set up a tense finale but the visitors slipped to a fourth consecutive defeat.

Alex Neil’s Norwich, relegated from the Premier League last season, were second in the table a month ago, but a five-match win-less streak has seen them slip to sixth in the Championship.

Holloway, who managed QPR between 2001 and 2006, returned to Loftus Road following the dismissal of Jimmy Floyd Hasselbaink and saw his team make a bright start.
Olsson’s early dismissal handed the hosts the upper hand and, after Chery screwed his spot-kick wide, Rangers took the lead through a close-range finish from Northern Ireland international Washington.

Norwich winger Jacob Murphy hit the crossbar in the second-half and then set up Naismith, whose header gave the visitors hope of a comeback.

However, City were unable to find a late equaliser, allowing Holloway to end Rangers’ run of three games without a win on his return to West London.

QPR manager Ian Holloway: ‚ÄúWe got a lot of things wrong and I could see a lack of belief after Norwich scored. We stopped passing and using the extra man.‚Äù

‚ÄúBut I was looking for character and I know we have it. Long may that continue.‚Äù

‚ÄúTo win games at this level you always need a bit of luck. All teams will have minutes (of pressure) no matter how many players they have on the pitch.‚Äù

Norwich manager Alex Neil: ‚ÄúThe fans will be frustrated and annoyed and I understand that. My job is to win games. All I can say is that I am working extremely hard to turn things around and so are the players.‚Äù

‚ÄúI thought they worked extremely hard and kept going until the last minute. We did better in the second-half.‚Äù

‚ÄúYou’re looking to stick to the task and not concede sloppy goals, and then as the game goes on maybe quieten the crowd. But once we conceded that goal it’s difficult.‚Äù

‚ÄúThe two goals we conceded in the first-half made it too easy for QPR.‚Äù 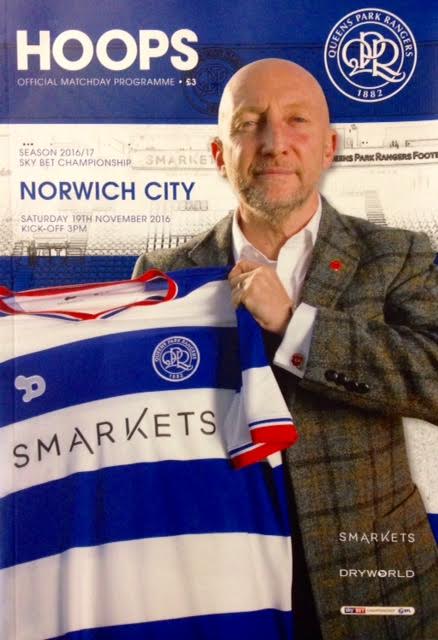 I made my first appearance for a long time in the Conni pre-match, where a large contingent of the Irish R’s were meeting up.

Roger Morgan and Gary Micklewhite were the latest ex-players to be inducted before kick-off. We then observed a minute’s silence in memory of those that fell at the Somme 100 years ago.

And what a start to the match! Jack Robinson’s enormous throw into the box after a minute or so resulted in a handball close to the goal-line. Red card awarded and it seemed like an eternity until Tjaronn Chery was able to take the spot-kick. No excuses, it was well wide but you just felt that the longer it was delayed the more chance he would miss it!

There was a very nasty challenge on Joel Lynch just before half-time and the Norwich player was very fortunate to get away with just a yellow.

The hard-working Conor Washington got his well-deserved goal from a corner and then we doubled our lead following Chery’s superb through ball which Seb Polter took in his stride and put away.

We were winning balls that weren’t even 50/50 and Ollie was lapping it all up and he was told a few times not to stray out of his technical area. Much the better side until around the 70 minute mark when City hit the crossbar and soon after that they pulled a goal back.

Although there wasn’t anything else on target, they threatened and enjoyed a period of possession.

Great atmosphere as expected, its been a long time since Loftus Road rocked like that…Ollie (and Birch) are back!