Swindon were forced to play extra-time with ten men after Lloyd Jones came off with an injury and they had made all the permitted substitutions.

Conor Washington then scored his first goal for QPR before the Robins’ James Brophy smashed in to set up a shoot-out.

Jimmy Floyd Hasselbaink’s side have been drawn at home to Rochdale in the second round. 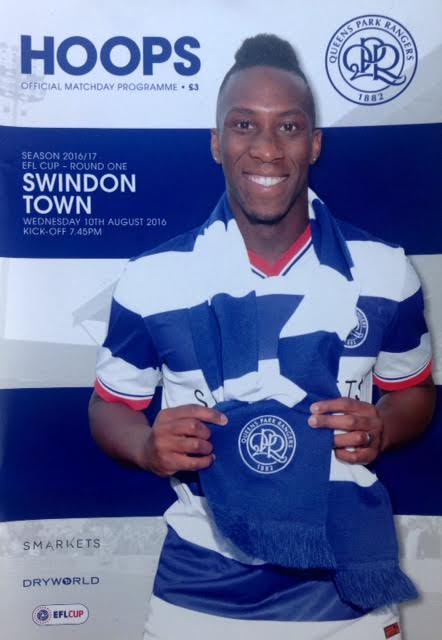 I thought that the back four were a shambles, especially in the first-half. We were quite good at times going forward and on the 120 minutes play, we could and should have won it but in the end had to rely on victory in a penalty shoot-out.

I was very pleased that we made it through…and even more pleased safe in the knowledge that back four won’t be turning out next week!

It was good to meet up with Steve Russell, Colin Woodley (ESSEXURs) for a pre-match visit to the Kensington archives/meal and drink. Also nice to see so many fellow R’s supporters I know outside the ground, some of which I hadn’t seen in years.

I thought the back four left far too much room on the flanks with the wide Swindon players able to put in early balls with ease. Similarly, they seemed to walk through the centre of our defence as if we had no central defenders! I just hope that we don’t get too many defensive injuries!

Probably one of our poorest defensive displays for many a season and it shows how we need regular reserve team games to get some kind of understanding.

Matt Ingram was solid apart from his one poor decision to dribble the ball out of the area.

I do worry about Conor Washington who is most certainly in no way a one-up player. He needs Seb Polter with him to provide knock-downs and I hope he gets stronger and sharper with more game time. I feel he will be a wasted talent with no sign of two-up on the horizon.

Sebastian Polter is simply awesome when in full flow and the level of coaching he is having is producing obvious results. I just hope we can keep hold of him at this rate of improvement.

I liked Yeni Ngbakoto, Shodipo and Cousins, so we are certainly building a good squad but need to acquire a Seb Polter clone as soon as possible.

But… having said that we actually won!!!

I had met up with Colin (ESSEXURs) and Bernard (Kerrins) during the morning in Kensington, prior to undertaking some research in the local archive.

Jimmy Floyd Hasselbaink made eight changes from Sunday, which I think were far too many! Former Rangers player Jamie Sendles-White lined up at centre-back for the Robins.

The visitors had 5/6 very good chances in the first-half and were by far the better side. That said, Rangers did have their moments, which included Darnell Furlong striking the crossbar following Ngbakoto’s corner.

However, Rangers gradually improved after the break and it was good to see debutant Yeni Ngbakoto convert a good ball across the six-yard box in the 58th minute, following Nasser El Khayati’s quality run down the left flank.

Fourteen minutes later Jordan Stewart equalised when he got into space and took his opportunity well when he curled the ball into the corner of the net.

After using up their three substitutions, the visitors were reduced to ten men in added time when Lloyd Jones was forced off.

Conor Washington put the R’s back in front in the 93rd minute when he buried the ball from close range. Polter had crossed low to Chery from the right wing, who then twisted round to set up the Rangers No.9.

The Robins made it 2-2 in the 107th minute when James Brophy was on hand to place his shot wide of Matt Ingram.

Rangers finished strongly with Seb Polter in the thick of it, but we then had to prepare ourselves for a penalty shoot-out.

And we were to witness history in the making. Gordon Macey later informed me that it was our first ever penalty shoot-out success at Loftus Road!

The first spot-kick was taken by Anton Rodgers, which Matt Ingram superbly tipped onto the crossbar. Chery and Polter made no mistake, as did Thomas and Stewart for the visitors.

As the tension rose, Conor Washington eased our nerves when he converted penalty number six.

Next up was Bradley Barry who forced a superb save from the R’s custodian and it was left to Nasser El Khayati to settle it.