Rangers took early control and on 4 minutes deservedly took the lead. Following a good move through midfield, Ryan Manning finished well from the edge of the box.

QPR continued to have most of the possession and create openings. The Stones keeper was forced into making a flying save to deny the R’s a second goal.

The Rangers No.10 Ebere Eze, (released by Millwall in April), turned nicely in midfield to evade his marker and went on to fire his shot just past the post.

Josh Bowler was quick to make a very good interception just as the Stones player was about to pull the trigger, after the ball had been laid back for him.

Wealdstone equalised after 18 minutes following a corner. Conor Hudnott managed to get his fingertips to Wes Parker’s powerful header but he just couldn’t keep it out.

Ryan Manning curled his free kick into the side-netting, whilst at the other end Rangers defender Rhys Springer-Downes timed his tackle perfectly well, after a long diagonal ball was put over to the left-wing, and the threat was averted.

Rangers took the lead again after 38 minutes when Brandon Adams received the ball in a central position on the edge of the box. He turned and placed his shot in the corner. Half-time: 1-2. 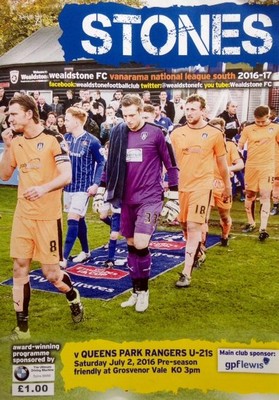 As expected, Paul Hall made wholesale changes after the break. Rangers steadily dominated the early stages but few chances were created.

The Stones managed to get more into the game and the nearest either side came to a goal was when Marcin Brzozowski dived full length to deny Sahr Kabba an equaliser. Later, an absolute screamer from the home side just evaded the crossbar.

Ruudi Clarke went down in some discomfort after what looked like an accidental blow to the throat, but was soon able to resume after receiving some treatment.