Joe English picked up Alan Barnes and myself from outside Harrow & Wealdstone Station.

The team sheet revealed two trialists, which included Matt Smythe (the other one wasn’t named) plus, surprisingly, Sandro. We were still finishing our pints as the R’s players trooped out in last season’s kit. 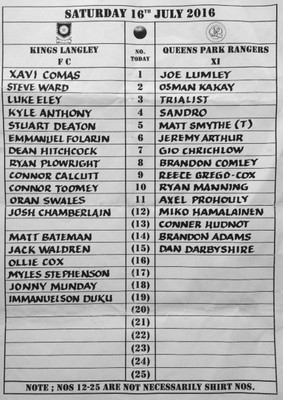 Reece Grego-Cox had the ball in the net as we were still heading for our vantage point on the half-way line. This prompted Joe English to shout out from behind me, ‚Äú52 seconds‚Äù. The R’s No. 9 had angled his shot past Comas after being set up by Ryan Manning.

A good ball found Grego-Cox who produced a nice touch before shooting just wide of the post.

Whilst at the other end, Joe Lumley raced out (as he does), to firstly block a shot and then recover the ball.

But it was the away side who looked like scoring the next goal. Brandon Comley’s shot narrowly cleared the bar, then Sandro’s effort took a deflection and the Kings Langley keeper managed to grab the ball at the second attempt.

That said, the home side fired a dangerous ball across the six-yard box but to no avail.

A good move down the right flank set up Ryan Manning whose shot was put round the post by Xavi Comas. Sandro was gradually getting more into the game and his next effort forced a flying save from the Kings Langley custodian.

This was soon followed by Brandon Comley letting-fly, and once again Comas made another very good save. Sandro had another attempt to get on the score sheet but it came to nothing. Half-time: 1-0.

Rangers made their first change with the introduction of Danny Darbyshire at the expense of Ryan Manning.

The R’s doubled their lead five minutes after the break when Axel Prohouly fed Gianni Crichlow, who then looked up and finished superbly.

The home side pulled a goal back with a bullet header from a corner. Then from a free kick, Danny Darbyshire got into space and fired just wide.

Two changes were made on the hour with Sandro and Crichlow being replaced by Adams and Hamalainen respectively.

Good work close to the bye-line resulted in the keeper making a save and then a clash in the box left Grego-Cox staying down and requiring treatment. He did eventually return, but I have to say he still looked dazed!

When it looked as if the move had fizzled out, their defender somehow knocked the ball in the net to make it 3-1 to the R’s on 82 minutes.

Following some poor defending, the Kings Langley player skied the ball well over the bar when it appeared easier to score.

Grego-Cox nodded in his second goal at the far post following a deep cross from Niko Hamalainen on 88 minutes.

The main positive for me was seeing Reece Grego-Cox playing where he should be, at centre-forward, and nabbing two goals.

The U21’s will travel to Silver Jubilee Park on Monday night to take on Hendon.

Thanks to Joe English for the lift.