The following article from 1933 was written by Ellis Coughter and appeared in the Meccano magazine. It provides a wonderful insight into British film production during that period. An extract follows:

‘One of the most interesting features of the cinematograph world since the War, has been the steady development of the British film industry.

During the War the American film industry made enormous strides, both technically and commercially, whereas all British activity of this kind was at a complete standstill.

The post-war British industry therefore started at a great disadvantage, and not least among its troubles was that of popular indifference. The attitude of the public has now changed, however.

A permanent landmark in British film progress was the formation in 1927 of the Gaumont-British Picture Corporation Ltd. This company acquired existing studios at Shepherd’s Bush, and enlarged them and improved the equipment so that more and better films could be produced.

The rapidly increasing demand for British films soon made expansion necessary, and last year the company opened at Shepherd’s Bush new premises that include the largest film studio in Europe.

During a recent visit to London I had the privilege of being conducted over these remarkable buildings, and I was greatly impressed by the high standard of efficiency that was evident everywhere.

The area of the site is 47,616 sq. ft. The main building has an overall length of 480 ft. and a breadth of 160 ft., and from its roof I was able to look down on the first sound-proof studio in Europe.

The roof can be used as a stage for filming or ‚Äúshooting‚Äù outdoor scenes, but at the time of my visit it was being used for its general purpose, that of a salvage yard.

On all sides were relics of ‚Äúproperties‚Äù, as the scenery and stage furniture is called, used in previous films.

I noticed, for instance, identification boards entitled ‚ÄúThe Great North Road‚Äù, and signposts marking the way to Bruddersford and other well-known places, all of which had been used in the recent film ‚ÄúThe Good Companions.‚Äù

This film, by the way, is one of the longest British films ever made, and takes only a few minutes short of two hours to show. I also saw the motor-car used by Miss Trant in this film, and many of the other stage properties used in the various scenes.

The five studios, or stages, situated on various floors of the building, have a total floor area of 90,000 sq. ft. or over two acres. These studios vary in size, the largest of them being 120 ft. long, 85 ft. wide, and 35 ft. high and, as already mentioned, the biggest of its kind in Europe.

It is used for exceptionally elaborate sets, such as the wonderful re-production of the train and the interior of the Gare de Lyon station, Paris, used in the ‚ÄúRome Express‚Äù film.

An interesting feature of this great studio is a large water tank 48 ft. long, 28 ft. wide, and 10 ft. deep, and of 270 tons capacity, that is used for ‚Äúseaside‚Äù scenes.

The dressing room accommodation at the studios is sufficient for 500 to 600 persons.

When we descended from the roof I was escorted through the various studios, and in four of these I saw sets being built up in connection with the film ‚ÄúBritannia of Billingsgate‚Äù that was then being made.

In each studio the work was progressively advanced. In No.4 studio, for instance, the carpenters were just commencing to build up a room to be used for one of the scenes.

In No.3 studio the construction of a striking replica of Piccadilly Circus was almost completed, and in No.2 studio the finishing touches were being given to the inside of a public house that had to be ready for the actors the next day.

The largest studio, known as ‚ÄúNo.1‚Äù, interested me the most, however, as it contained a wonderful representation of Billingsgate Market. The amount of detail put into these sets was extraordinary. 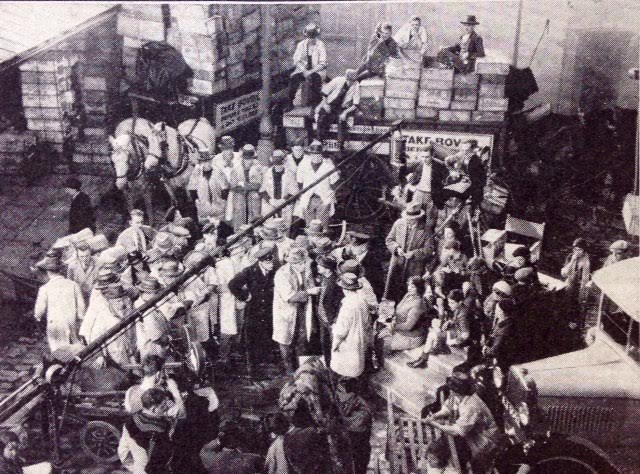 In the Billingsgate Market set, for instance, the outside of the market had been built up so completely that I found it difficult to realise that I was standing in a large room on the second floor of a building, and not actually in the market itself.

The entire floor of the room was laid with full-sized cobblestones; there were gutters and iron grates for the water to drain away, and even orange peel and match boxes were to be found in the gutters.

At the time of my visit to this set they were shooting a scene featuring Gordon Harker, the well-known star who plays Cockney parts so effectively. This part of the film is concerned with the activities of a film company who are taking a film of Billingsgate, and in the middle of the ‚Äústreet‚Äù a travelling ‚Äútalkie‚Äù van was standing.

Gordon Harker, in the role of a Billingsgate porter, comes up the steps of the van with a companion, at the same time saying something to the effect that ‚Äúthere is nothing in taking moving pictures – you have only to turn a few knobs!‚Äù

He then explores the interior of the van, turning a few knobs in the meantime, and when he turns the wrong knob there is a violent explosion and he is blown backward out of the van.

Actors in the costumes of citizens, and many children, were crowded around the scene awaiting their call, and porters from Billingsgate Market, together with railwaymen and railway vans were also there.

Large numbers of fish boxes had been brought from Billingsgate, and the strong smell of fish that emanated from these added still further to the realism of the scene.

I found it indeed difficult to believe that I was only in a film studio. Half-a-dozen dirty little children were looking on, and for a moment I wondered why the film company allowed them to be there on so important an occasion. Then I discovered that they, too, were actors, and were part and parcel of the great set!

The scene that I saw taken will probably last 20 seconds on the screen, whereas the three shots that were made of it while I was there took over half-an-hour to complete.

The various sets for the films are built up from blueprints designed in the drawing office, and an army of carpenters is kept busy in fitting them together according to the instructions.

Painters, plasterers and blacksmiths are also at work, each on their respective tasks. The floors are covered with numerous cables varying in size from that of a lead pencil to the thickness of a man’s wrist, most of them carrying the heavy current of the arc lamps. 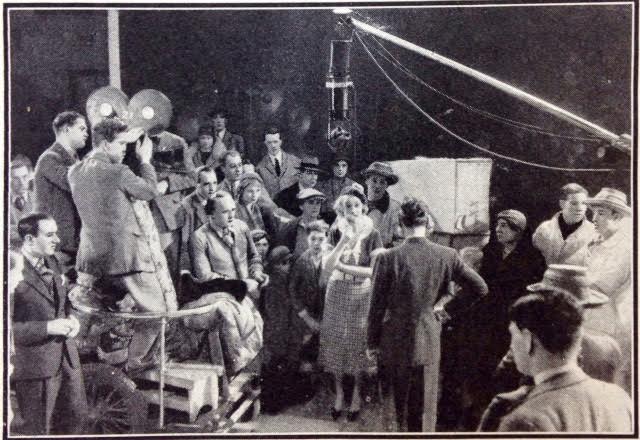 These lamps give so bright a light that in the studio at night one seems to be standing in the bright sunlight of a summer’s day. The lighting units in the studios total 650, and I was interested to hear that the original Shepherd’s Bush studio had only 60 units.

The high-intensity illumination necessary to light up the sets when shooting is taking place makes film acting very warm work. The considerable rise of temperature when the lights are on also makes adequate ventilation very important, and 14 tons of fresh air is passed into the studios every hour.

The laboratories at the studios are the finest in Europe, and they can turn out 4,000,000 ft. of finished film per week. In addition to developing, printing and assembling the big feature films, the laboratories also deal with the Gaumont News film, and a news film received one day can be printed off in hundreds and circulated to the picture houses the next day.

The large amount of inflammable material always on hand in a film studio makes an adequate fire fighting installation imperative, and the Shepherd’s Bush studios are equipped with two separate water mains and 3,000 sprinkler heads, so that no matter in what portion of the building a fire may break out it can be attacked effectively without the slightest delay. Connecting up these outlets entailed the laying of six miles of piping.

The capacity of the studios is so great that often work is in progress on several films at the same time.

A few weeks after my visit, for instance, four important films were in course of production simultaneously, and two of them, ‚ÄúOrders are Orders‚Äù and ‚ÄúI was a Spy‚Äù, necessitated large casts.

The studios at Shepherd’s Bush, in fact, are busier today than at any time in their history, and the rapid growth now taking place in the British film industry is shown by the fact that since these new studious were opened a year ago the staff has been increased from 250 to 750 persons!’

In 1941, the studios were purchased by the Rank Organisation, and eight years later the BBC bought them.

The studios were demolished in 1993 and the site was later redeveloped into a housing estate.

(The above pics are taken from the same magazine and feature on-set scenes from the film, ‘Britannia of Billingsgate’)