On Tuesday 21st February 1961, a Showbiz side took on a Jockeys X1 at Loftus Road in aid of charity.

A match report appeared in the Acton Gazette and Post the following week:

‘Tommy Steele struggled to get his muddy boot laces tied and Dave King stretched and pushed trying to slip a rather ill-fitting football shirt over his tousled head. Three or four other notable Showbiz men charged round looking for socks, shirts, shorts and other essential items, which had somehow or other been mislaid.

In a small room just off the Showbiz dressing room, Pop singer Tommy Steele lounged nonchalantly back on a couch as the trainer, Bill Parry, slapped and pummelled his legs applying evil- smelling embrocation.

Dave King finally succeeded in pulling on his shirt and looked round grinning at the nine assorted Showbiz men. Nine? Wait a minute we’re one short.

At that moment, 7.29pm precisely, the dressing room door burst open and the rather harassed-looking figure of Ronnie Carroll appeared. ‚ÄúHello Ron!‚Äù shouted Dave with obvious relief. ‚ÄúCome on boy, you’ve only got a minute before the game.‚Äù 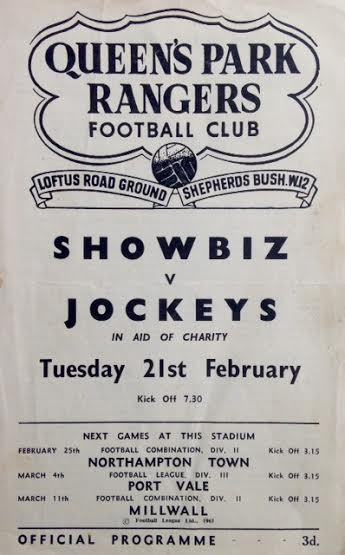 Outside on the floodlit pitch the Jockeys were already under starter’s orders but changing continued slowly and jokingly in the Showbiz room.

Eight minutes after the intended time of kick-off the Showbiz team came trotting on to the pitch. Loud cheers came from the crowd of over two thousand as Dave King, Tommy Steele and Ronnie Carroll marched forward and were immediately mobbed for autographs.

Play was fast, furious, friendly and often side-splittingly funny. Before half-time three goals were scored – all by the Showbiz X1 but the score was 2-1.

In their changing rooms at half-time the Jockeys seemed far from disgruntled about the score.