The hosts continued to dominate in the second-half before Freddie Sears missed a good chance to put Ipswich ahead. QPR finally sealed the three points when debutant Nasser El Khayati set up Phillips to head in at the back post.

Freddie Sears could have equalised for the Tractor Boys in injury time, but Alex Smithies saved sharply to secure Hasselbaink’s first win at Loftus Road, more than two months after he replaced Chris Ramsey as boss.

The R’s stay 13th in the table, while Mick McCarthy’s Ipswich drop out of the play-off places after losing their second successive away league game.

QPR manager Jimmy Floyd Hasselbaink: ‚ÄúTo win overall is satisfying, and obviously at home, yes. When you see the first-half and you go in 0-0 at half-time, you’ve done yourself an injustice.‚Äù

‚ÄúBut I think we kept being positive, kept plugging away, kept going and kept having the trust that we would score the goal we deserved.‚Äù

Ipswich manager Mick McCarthy: ‚ÄúIt’s where you are in May that counts and the key is to get into that top six.‚Äù

‚ÄúThe conditions were horrible but it ended up being an exciting game and we were much better in that second-half and could have scored.‚Äù

‚ÄúI thought we were the ones that were the most likely to win the game in the second-half, so to have conceded in the last few minutes makes it even more disappointing to lose.‚Äù 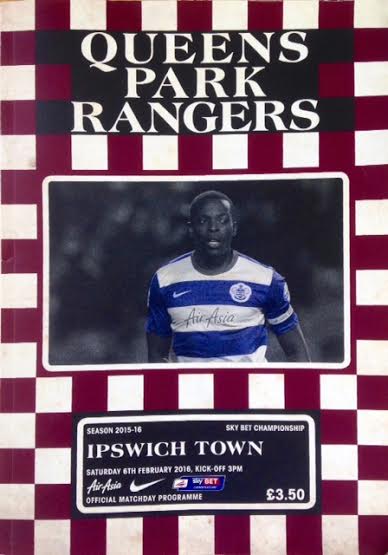 The Ipswich keeper made a very good double save in the opening minute and Rangers were by far the better side in the first-half, but I did wonder if all those missed opportunities would eventually cost us.

Ale Faurlin was harshly booked and it was also apparent that he was being crudely targeted by some of the Ipswich players! He was eventually replaced around the hour mark by Daniel Tozser.

The second-half was more even, but significantly, debutant Abdenasser El Khayati, was introduced after 80 minutes, and after switching wings, his cross from the right was met at the far post by Matty Phillips.

Although the winning goal came after 88 minutes, we had to endure heavy pressure from the visitors with Alex Smithies performing some heroics between the posts as a further 7 minutes was played.

A good, assertive team performance, but if I had to pick out a MOM it would be hard to choose between either Alex Smithies or Massimo Luongo?

Peter Hucker was the latest former player to be interviewed at half-time and I’m pleased to say that my Stan Bowles fundraiser badge got off to a flying start.