The nature of this defeat hurt deeply. We again managed to show the country, in style, just how poor we are.

There is a constant amongst these players…a constant to continually prove that they are not up to it at this level. You can organise, you can run all day, but the lack of technical ability at times was embarrassing.

JFH has a big job on his hands, and surely a serious clear out is looming, providing he keeps his job.

Meanwhile Les Ferdinand continues to remain at the helm. He too is proving to be a constant…a constant failure!

The only ones who need to apologise are the players. That was unacceptable and unforgivable, irrespective of whether it was a local derby or not. Especially as the players spent the week before saying how they were looking forward to a local derby, how they owed the fans for the previous debacle blah blah blah.

Four London derbies, four defeats, ten coals conceded, one goal scored. The only one I felt sorry for was Smithies as his defence went AWOL every time Fulham got into our box! 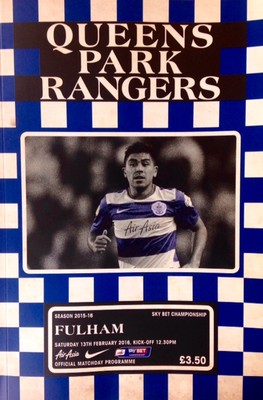 Jimmy Floyd Hasselbaink was stunned by QPR’s dismal performance and could not explain their defeat. Rangers were blitzed by three first-half goals in a one-sided West London derby at Loftus Road with Ross McCormack, Moussa Dembele and Tom Cairney scoring for the visitors.

The substitute Tjaronn Chery scored in the last minute for the hosts, who were unbeaten in their previous five matches.

Asked why Rangers had performed so poorly, Hasselbaink, appointed manager in December, said: ‚ÄúI don’t know. I will have to watch the video and review it.‚Äú

‚ÄúWhat I do know is that it was not acceptable. The fans deserve better and we deserve better to ourselves. We had put the standard down in the previous matches and this was well under that standard. We were making steps forward and I didn’t see this coming at all.‚Äù

‚ÄúIt’s two steps back. It’s now about starting again, getting things right, taking responsibility and starting to look at ourselves again. I’m not going to single out individuals. We are a team, and as a team we were well under par.‚Äù

McCormack, who scored twice in his team’s 4-0 hammering of QPR in September, gave his side the lead in the 35th minute. He drifted between the centre-backs, Grant Hall and Nedum Onuoha, to collect Cairney’s clever pass before firing past the Rangers keeper, Alex Smithies.

In first-half stoppage time, Cairney scored from the rebound after Dembele’s shot had hit the post. Hall, in attempting to block Cairney’s follow-up, deflected the ball past Smithies, who might otherwise have made the save.

Rangers were booed by the home fans at half-time and on occasions during the second-half. Hasselbaink said: ‚ÄúThey were getting frustrated. It is what it is. Do I like it? No. Do I want them to cheers on our players? Yes, of course.‚Äù

‚ÄúWill getting behind the players help them play better instead of booing them? Yes. But I understand their frustration. Do I say they should do it (boo)? No. We need their support until the last minute.‚Äù

‚ÄúI have asked for that and will keep on asking for that. They have to be our 12th man even when things are not going right. They can lift the players. But we know how it is. Hopefully, in the next match we can put it right.‚Äù

Slavisa Jokanovic, on the other hand, savoured a resounding victory – Fulham’s first win since his first game in charge on 29 December, when he watched from the stands.

‚ÄúAfter a month of them suffering, I am happy for our supporters,‚Äù the Serb said. ‚ÄúIt was a great day for us and I believe we deserved that.‚Äù

I really never expected anything like that! Absolutely shocking! Fulham had a midfield and we didn’t! Alex Smithies must have also had serious misgivings about his defence?

A total shambles again, especially after all that had been said pre-match. Some of the players may have said that they were well up for it, but talk is cheap!

The only positive for me was the introduction of Abdenasser El Khayati, but even that was long overdue?

Was Conor Washington 100% fit or not, as I’ve heard conflicting stories about his fitness?

See some of you at Bolton on Saturday.