Taddy & Co. produced three sets of cards in their Prominent Footballer series. This latest one is the 14th QPR card that I have featured from the first series issued in 1907.

On the reverse side of this original card it reads: ‘A ripe, full flavoured Pipe Tobacco, fine cut. In a good well-seasoned briar or a well-coloured meerschaum it will be found an admirable tobacco.’ 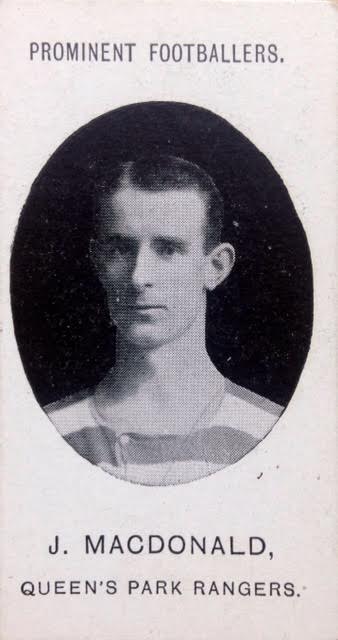 According to the cigarette card the surname is spelt as ‘MacDonald’ whereas the player who made his debut for QPR in 1907 is accepted as being ‘McDonald’. In Gordon Macey’s history of our club, Gordon also lists a ‘John MacDonald’ whose first Rangers game wasn’t until the following year.

John McDonald was born in Ayr in 1882. Apart from playing for his local side, he went on to play for Blackburn Rovers, Leeds City and Grimsby Town. John was transferred to the Rangers in 1907 and made his debut against Tottenham on 14th September.

John was described as ‘a quiet fellow who was unassuming, whose play was more solid than showy and was a useful man to have in any defence.’

He retired in 1913 after making 198 league and cup appearances.

(John McDonald’s career details were obtained from the following books: The History of Queen’s Park Rangers’ by Gordon Macey and also John Marks’s ‘Heroes in Hoops’)