This particular issue is dated 23rd November 1968 and qualifies for this series because among the footballers featured on the front cover was R’s goalkeeper, Ron Springett. Whilst inside, the stories included:

‘Braddock – Master of the Air’ – Sergeant Matt Braddock, V.C., was one of the RAF’s greatest pilots. Sergeant George Bourne, who flew as his navigator, tells his story. 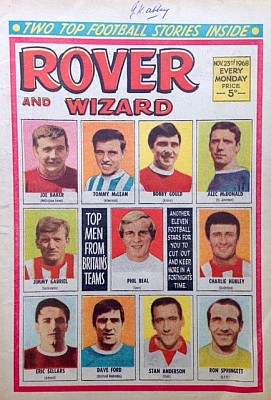 Next up, were the football queries – ‘Readers Ask the Questions – We’ve Got the Answers’

‘And Away Went Kelly!’ – The referee gasps! The fans’ eyes bulge! Why has a policemen joined in the effort to stop Kelly’s sensational dash?

‘The Saddle Tramps’ – There’s danger ahead for young Swipe and his working partnership with Joe when Joe decides to earn his living on the Wall of Death.

This is followed by: ‘The Valley of the Mask’ – Bunch and Ben stagger to what they think is safety. But a battery of blowpipes is waiting for them! 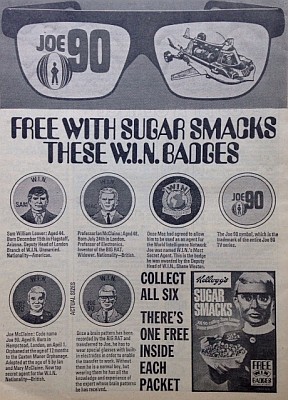 ‘Sir, I’ve Gone and Lost Our Gun’: German fighters close for the kill and the British gunner makes a tragic blunder. Imagine his pilot’s feelings when he shouts‚Ä¶.

‘It’s Goals that Count’ – Everyone at the training session is frozen stiff by the bitter cold – except the Wanderers new centre. Why?

And finally, ‘Who Dares Wins’ – the back page honours the exploits of the Special Air Service.