On this day in 2006, Kiyan Prince tragically lost his life. Alan Barnes wrote this tribute to him at the time:

‘I personally have only watched Kiyan play for the last couple of years. Firstly, at the Acton Training Ground on Sunday mornings in the U13/U14 age group and then last season when possible, on Saturday mornings with the U16’s.

With the younger group, the first thing I noticed about him was that he had a great name for a footballer….’KIYAN PRINCE’! The second thing was that besides his ability, he had tremendous shooting power. Me and Rob Bennett would be watching the game and if the ball fell to him twenty or so yards out, we would both say: “He’s going to have a go here.”

I agree with Joe Gallen when he says that he had great potential and he has been compared to Theo Walcott. But to me, going back over the years, he reminded me of Richard Pacquette who was also a tremendous prospect before, for some reason, he lost his way.

When youngsters like Sappleton and Maguire moved up early to the U18 group, youngsters like Kiyan were given their chance in the U16’s. He took his chance and came in towards the end of the season and finished with 9 goals, the joint top scorer.

With Ray Jones appearing for the 1st team and Ricky Sappleton not far away, I’m sure Kiyan, aged only 15, would have been involved with the U18’s this coming season and perhaps even Reserve team football too. 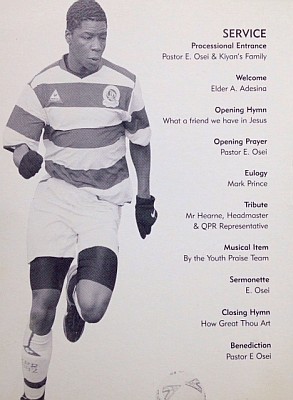 I went down to Loftus Road for a look at the tributes outside the main entrance. There were great ones from friends and from fans who probably didn’t know Kiyan or had never seen him play. But for me the tributes from young team mates were fantastic and the television news showed the flowers and further tributes outside his school in Edgware.

Kiyan is now playing for the greatest QPR team ever, in heaven. There is no age group there, just Rangers players who had made it to the HIGHEST LEVEL.

May I offer my sincerest condolences to Kiyan’s family, team mates and friends on behalf of the Saturday and Sunday morning crowd.’