This cigarette card is the fourth in the series and features one of our goalkeepers from the mid-1900’s.Cohen Weenen & Co. was a small tobacco company based in London. They produced their first set of cards in 1901. Then in 1906, Series No.2 of: ‘Owners, Jockeys, Footballers, Cricketers,’ was issued. This set of 50 cards included QPR goalkeeper Arthur Howes. 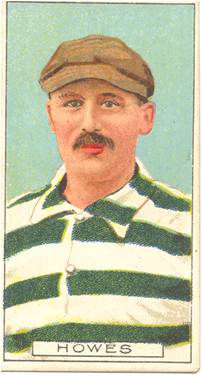 The reverse side of the card reads: ‘Howes, Queen’s Park Rangers, whose goal-keeping has been exceptionally good during the present season (1906-07}’.

An auction from November 2010 stated that this card had a catalogue value of ¬£14.00.

Arthur Howes was born in Leicester in 1876 and after signing from Brighton& Hove Albion, his previous clubs had included; Leicester Fosse, Reading, Dundee and Dumbarton. He made his R’s debut at Luton Town on 12th November 1904 and went on to make 53 1st team appearances. He was described as ‘alert and agile’, but sadly his career at Rangers came to an abrupt end because he was so severely injured. His last appearance for the R’s was at Reading on 9th March 1907. In fact, he never played in another first class match again.

(My sources of reference include John Marks’s, ‘Heroes In Hoops’ and Gordon Macey of course)