We knew that Neil was terminally ill, but it still came as a great shock of course when we heard the news that he had indeed passed away.

Although Neil had resided in Kent for many years, Dale Matthews told me that they had both attended Flora Gardens Primary School and he was fairly sure that Neil had grown up in Nasmyth Street which is by the Thatched House pub in Hammersmith.

When he arrived at the Springbok for the very last time, I said to him (or words to that effect): Neil, sometimes you look at people and think whether they had made a difference, and you most definitely did make a difference mate.‚Where there had previously been discord amongst some R’s fans following the Fulham Park Rangers protests, Neil built bridges and instigated lots of new ideas. The Official Supporters Club motto became: ‘Always There’. 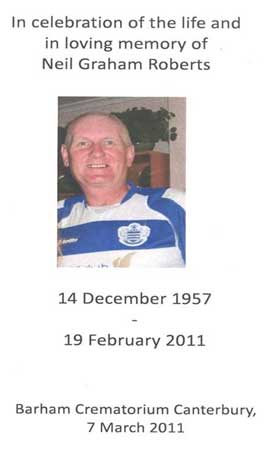 His funeral took place on Monday 7th March 2011 at Barham Crematorium, which is near Canterbury in Kent.

Last June, over 400 runners took part in the annual ‘Man on the Run Race for Life’ at Hampton, Herne Bay. Amongst the runners were a number of R’s fans including Dave Robinson, Justin Stone and Joe Hylton. They were competing in memory of Neil. Poignantly, Neil’s young son, Charlie, started the race which provoked a loud rendition of ‘UR’s’. The event helps promote awareness of male cancers.