‘When Rangers Win and Chelsea Lose, Oh Rangers, You Got Me Singing the Blues’. The fact that both these lines happened in the same game makes it all the sweeter.

Queen’s Park Rangers beat Chelsea in an ill tempered local derby which saw the visitors reduced to nine men before half-time. QPR won their first home game since April and their first win at home in the Premier League since beating West Ham back in April 1996 with the only goal of the game scored by Heidar Helguson from the penalty spot. I have witnessed every one of our fourteen victories against our neighbours from south of the borough, but I have never enjoyed a win so much as on Sunday. 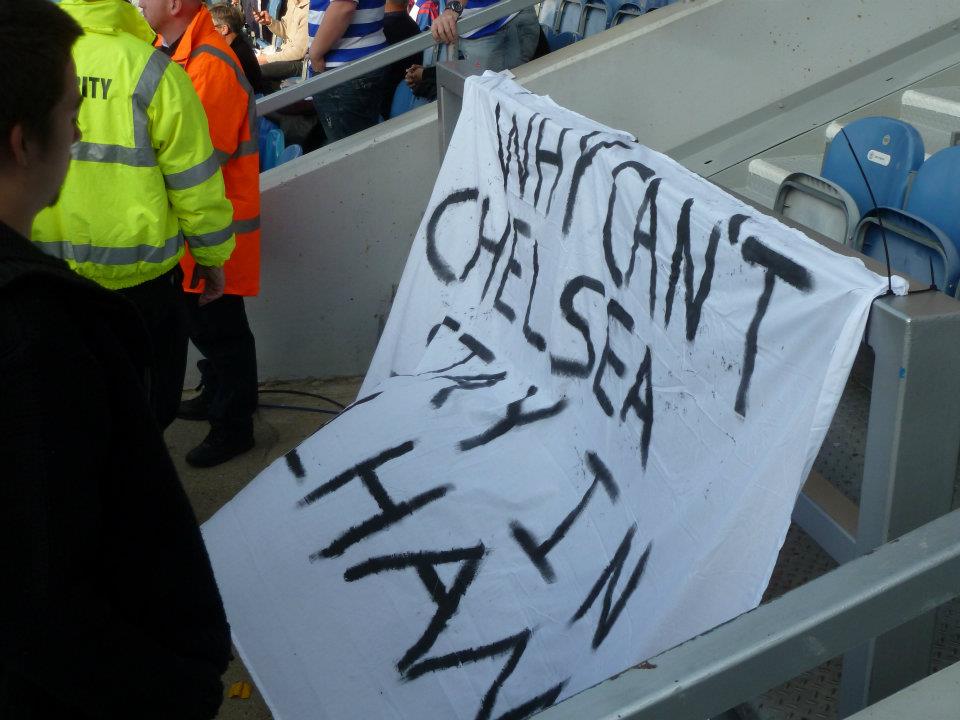 It’s a well known fact that London SW6 is a more classy area than London W12 when it comes to the type of people that live in both areas, but someone forgot to tell the Chelsea players as they were reduced to a snarling, kicking, cheating, unsporting rabble that we all knew they were. Only the referee knows how Chelsea ended up with nine men on the pitch at the end of the game as they resorted to what can only be described as ale house football for the first half and there were also outbreaks of more thuggery in the second half as they chased the game.

The visitors came into the game on the back of three straight league wins, scoring a dozen goals in the process whereas QPR had won two points out of nine which included a thrashing at the hands of our other neighbours from across the borough.

Neil Warnock made two changes with Adel Taarabt restored to the starting line-up at the expense of Jamie Mackie with the returning Clint Hill taking up his position at left-back with Armand Traore out injured. So Paddy Kenny had the task of keeping the opposition at bay along with Fitz Hall and Anton Ferdinand in the middle of defence with Clint Hill and Luke Young filling the full-back berths. Derry and Faurlin were in their customary defensive midfield places with Wright-Phillips, Barton and Taarabt in advanced positions in support of Heidar Helguson ploughing a lone furrow upfront. 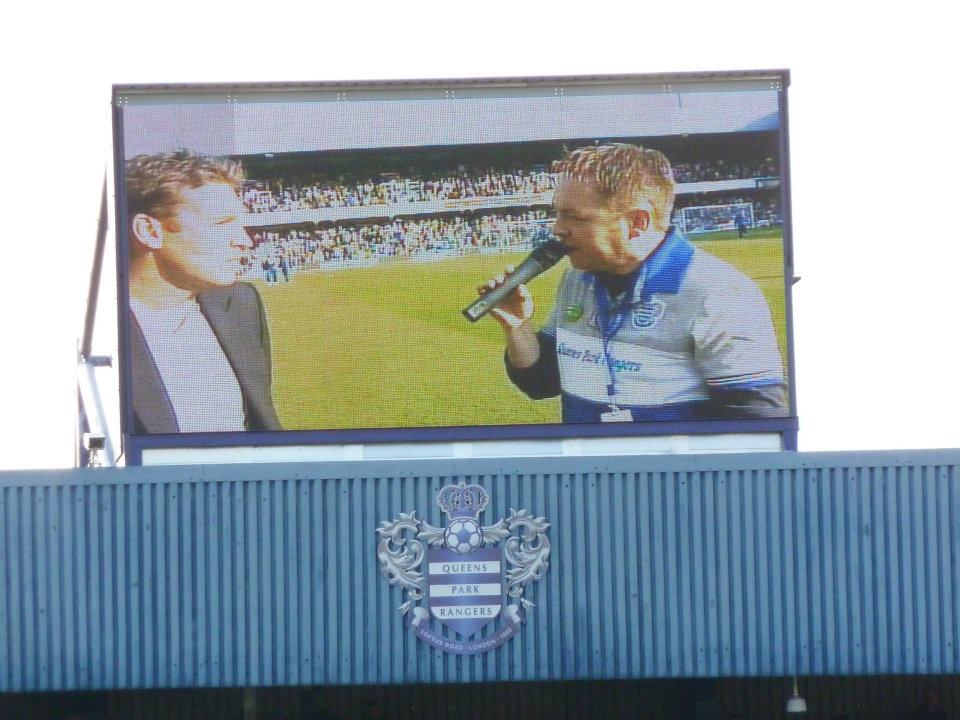 The scene was set as early as the third minute as Didier Drogba rolled over twice following minimum contact from Shaun Derry. The roll couldn’t have been bettered if you slapped some rashers of bacon on top of it. Then on six minutes, John Obi Mikel fouled Adel Taarabt and immediately the England captain ran 20 yards along with England’s left-back to join in with Mikel’s abuse of the referee for what was a stonewall foul in any language. Chelsea were rattled and the game had only just started. In the preceding six or so minutes, every ball put into Chelsea’s half was won by Heidar Helguson who was allegedly being marked by David Luiz. Taarabt had already shown that he was up for it as were the rest of the team as we snapped at our opponents heels every time they got the ball. 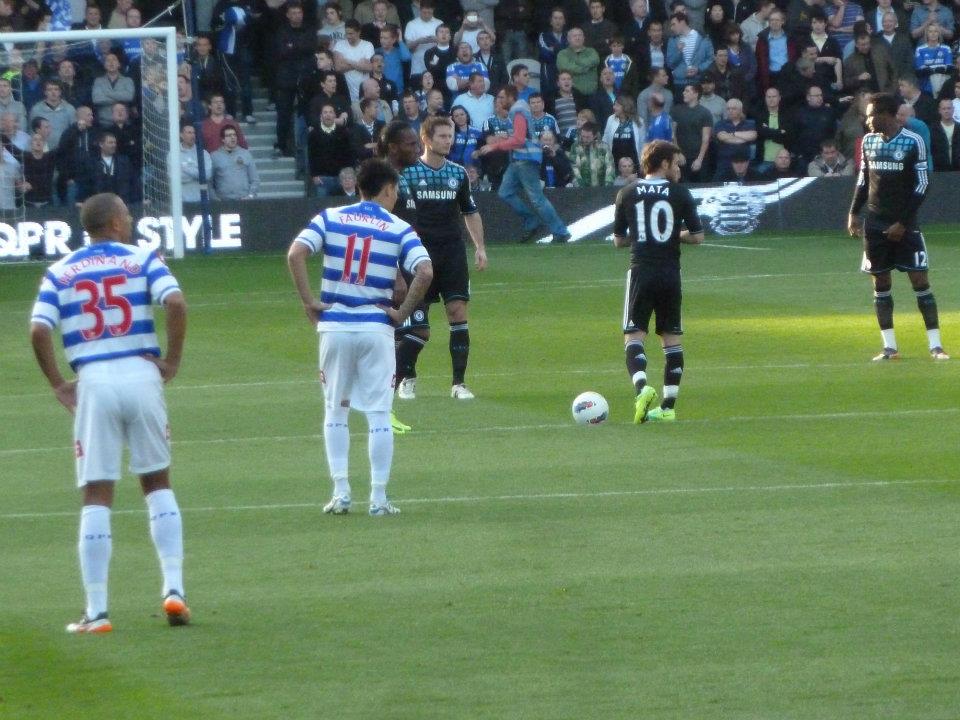 The game was very open, but on ten minutes it was turned on its head when QPR won a penalty when Helguson challenged Luiz in the air, the ball then went into the box and as Helguson tried to get the ball under control, Luiz inexplicably flattened the Icelandic international. Helguson, following an argument with Taarabt as to who would take the penalty, stepped up and fired his shot to Cech’s right. Time seemed to stand still from the home end as it seemed the keeper had done enough to save the shot, but the shot was powerful enough to nestle into the side of the net to the sound of what can only be described as the loudest noise ever heard inside Loftus Road since the Rock group ‘Yes’ played a concert there in the 1970’s. One nil to the Superhoops !!! 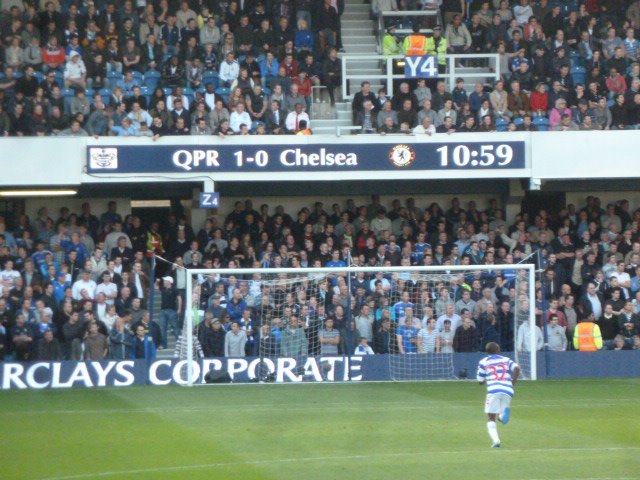 Chelsea re-grouped and started to play the ball around, but we were equal to them in every position of the pitch with Paddy Kenny doing more sunbathing than actually touching the ball. First England’s left-back found himself in space inside the box, but his shot went well wide to the sound of jeers from the home end. Then Didier Drogba obviously mistook Paddy Kenny for some bloke sitting in R Block on 24 minutes as looking up he hit a right-foot shot that ended up hitting the advertising boards in front of the Ellerslie Road Stand. Three sides of the ground burst out laughing. The laughter levels reached record levels ten minutes later as the visitors received their first of a total of nine cards dished out by referee Chris Foy.

Shaun Wright-Phillips obviously knew a trick or two about his former team mates and ran at the right-back Bosingwa and as he got to the edge of the box he touched the ball past the defender and was taken out by the Portuguese international for a free kick. To rub salt into the festering wounds, the referee brandished a straight red card. So it was cheerio and keep the hot water running as he wouldn’t be on his own in the team bath for long if the first half hour was anything to go by !

Adel Taarabt lined up the free kick and despite beating the four-man wall, Cech made a comfortable save. Five minutes later, Daniel Sturridge was thankfully substituted with Ivanovic taking his place and shoring up the defence no doubt. The day got even better on 40 minutes, although Adel Taarabt would disagree, when Didier Drogba was given the second straight red for what can only be described as a disgusting, dangerously high, two-footed tackle on the Moroccan international. The only good thing to come out of it was the fact that our No.7 wasn’t seriously injured. It was a coward’s challenge from the world’s biggest coward. Had Drogba been on the receiving end of that challenge, he’d still be rolling around now. Taarabt’s too good for you ! Seconds before the end of the first half, Chelsea made a second substitution with Nicholas Anelka replacing the pathetic Juan Mata. 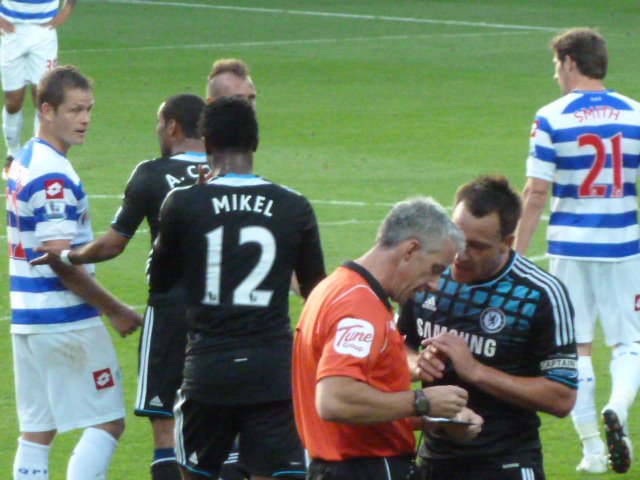 On Chelsea’s website match preview some classless numpty wrote: “The noises from the R’s camp are redolent of the clich√©s produced by the underdog before a cup final: the crowd being the 12th man, the baying hordes close to the pitch affecting the visitors and the playing field itself being smaller than Chelsea are used to. Well it is true that at 112 yards by 72, Loftus Road has one of the League’s smallest fields. However, it is just one yard shorter and one narrower than the familiar surface of Stamford Bridge”.

So why did Mata bottle it when faced with taking a third successive corner in the corner by Q, P and R Blocks ??? He couldn’t take the stick obviously and begged Frank Lampard to take it instead. Lampard being an experienced pro took the abuse on the chin and even managed to laugh at the home fans. Half-time: 1-0. Half the Chelsea team had words with the referee as he walked off the pitch with his assistants. No change there then.

The second half kicked off and Chelsea were soon back into their stride, receiving their first yellow card of the game within four minutes with John Obi Mikel fouling Adel Taarabt. Taarabt is indeed too good for you !!! On 53 minutes, Luke Young found himself in the box with only the keeper between him and immortality, but his low cross-cum-shot went narrowly past the far post.

Five minutes later and Derry tussled with Lampard and for the first time in the game the England player lowered himself to the level of his team mates by letting Derry get under his skin. Both players were rightly yellow carded. Then another five minutes passed before another Chelsea player got yellow carded, this time Ivanovic for a foul on Taarabt (who else ?). Chelsea then went a mammoth ten minutes before another yellow card with the clearly out of his depth Brazilian David Luiz fouling Anton Ferdinand.

At times the visitors even decided to stop kicking humans and kicking the ball instead and any neutral would surely agree that they actually looked like a football team for the last 20 minutes or so. They even crafted two chances with balls into the box, but on both occasions Paddy Kenny decided that sunbathing time was over with the sun disappearing behind the horizon and made a top drawer save from Anelka’s point blank effort and the other chance was a relatively easy save in comparison. 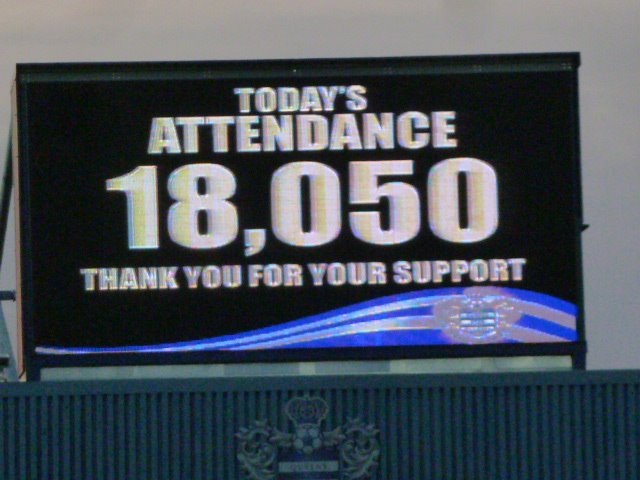 There was still time in the last 20 minutes for more yellow cards to be dished out with Meireles and England’s captain and left-back being carded for what can only be described as unsporting behaviour as they obviously can’t take losing to their smaller neighbours. And I counted three times in the last 15 minutes where Chelsea players dived in the box to try and win a penalty, but referee Chris Foy stood firm against their obvious cheating tactics. Then there was the incident where Paddy Kenny kicked the ball out of play so an injured player could receive treatment. A Chelsea player took the throw-in and threw the ball to England’s captain and he played on ! The next time he touched the ball he was met by a crescendo of boos. He even got into a slanging match with fans in the Lower Loft. I recall a similar petulant performance when they lost at Craven Cottage a few seasons ago. A leopard never changes their spots and all that.

It was quite a nervous finale, but needn’t have been as on 75 minutes Helguson was found at the far post with a cross from Joey Barton, but his volley cleared the bar with the goal at his mercy. Five minutes were added at the end, but we were never in danger in that time as the referee’s final whistle was met with absolute pandemonium in the home sections of the ground for what was a famous victory. The visitors started with ten full internationals on the pitch, but you wouldn’t have known that fact watching this game. Full-time: 1-0.

MOTM: Anton Ferdinand with a Colossus of a performance.