The 1945-46 Season saw the re-introduction of the FA Cup competition. It was agreed that every Round up to and including the Quarter Finals, would be played over two legs. The campaign commenced with a 6-2 victory at Barnet and was then followed by a 2-1 win at Loftus Road. In Round Two, the R’s beat Ipswich Town convincingly 4-0 at home and 2-0 at Portman Road. Rangers were then drawn against Crystal Palace in the 3rd Round. A crowd of 20,080 saw a 0-0 draw in the first leg at Loftus Road. The second game was also goalless but because the weather was so bad, the match was abandoned with just a few minutes of extra time remaining. It was agreed that the score would stand and the replay would be played at a neutral ground.

Craven Cottage was the venue and the match kicked off at 2pm on Wednesday 16th January 1946. The front cover of the programme interestingly states: ‘Should the game still remain a draw after 90 minutes play, an extra 10 minutes each way shall be played. If the position remains the same at the end of extra time, the game must be continued and the first goal scored will determine the winner and also terminate the match.’ This rule wasn’t needed as the R’s won the game 1-0. Bert Addinall scored the goal and 23,000 attended the match. The team lined up as follows: Brown, Rose, Jefferson, Daniels, Ridyard, Farrow, Blizzard, Mallett, Addinall, Stock, Pattison. QPR then played Southampton in the 4th Round and won the first leg 1-0 followed by a 4-3 victory at Loftus Road. The R’s were then drawn against local rivals Brentford in the 5th Round but unfortunately went down 3-1 at home and could only manage a goalless draw at Griffin Park. 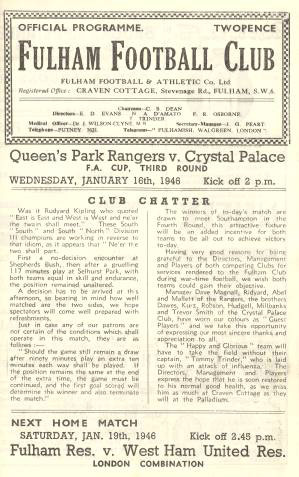 Apparently, the first known use of the ‘golden goal’ rule was many years earlier during the Final of the Cromwell Cup at Bramall Lane in 1868, although the term ‘golden goal’ was never used. Since the rule change by FIFA in 1993, the first ‘golden goal’ was scored by Australia in a Quarter Final match in the World Youth Championships, then in 1994 when Huddersfield beat Lincoln City and also in the 1996 Euro Final when Germany defeated the Czech Republic etc etc. There was also the ‘silver goal’ rule as well for a while of course !!!

Thanks to Brian Russell for the loan of the programme.